The giant clam (Tridacna gigas) is a bivalve mollusk that can reach up to 4.3 ft (1.3m) wide and 660 lbs (300 kg). It is related to other soft-bodied critters like snails and squid; like other bivalves, such as mussels and oysters, its shell has two pieces attached with a hinge. The giant clam is the largest bivalve known in the history of the world, and it is heavier than any other mollusk alive today. 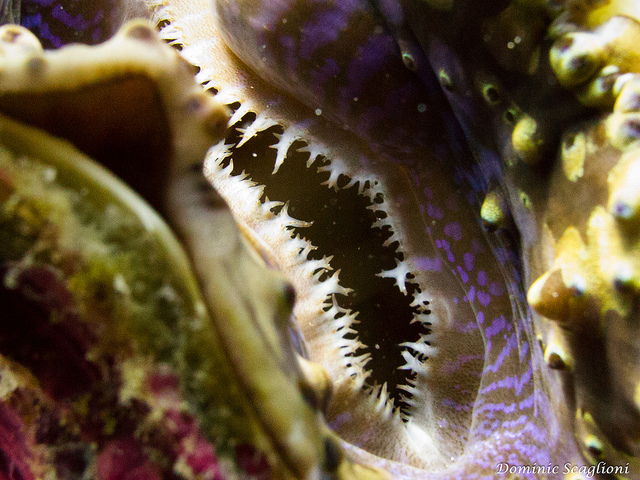 An up-close look at the incurrent siphon, through which water is inhaled, reveals the giant clam's gills. Photo by Dominic Scaglioni via Flickr, Creative Commons License.

Although the clams do some filter feeding, they are mostly dependent on another source of energy: they have a symbiotic relationship with microscopic algae called zooxanthellae, just like corals do. The “zoox” perform photosynthesis, and transfer the sugars they produce to the clam, in exchange for a safe place to live within the clam. Some giant clams have another symbiotic relationship as well, with a type of small crab that can live inside the mantle cavity.

The excurrent siphon is a tube that ejects water that has already been filtered back into the water column. Photo by Dominic Scaglioni via Flickr, Creative Commons License.

The giant clam is native to the shallow waters of the western Pacific Ocean. They have been harvested for their meat and for the aquarium trade, and their range is now so reduced that the species is listed as Vulnerable by the IUCN. Luckily, there has been some success in efforts to farm the giant clam for repopulation; combined with effective protection, they should be able to rebound.